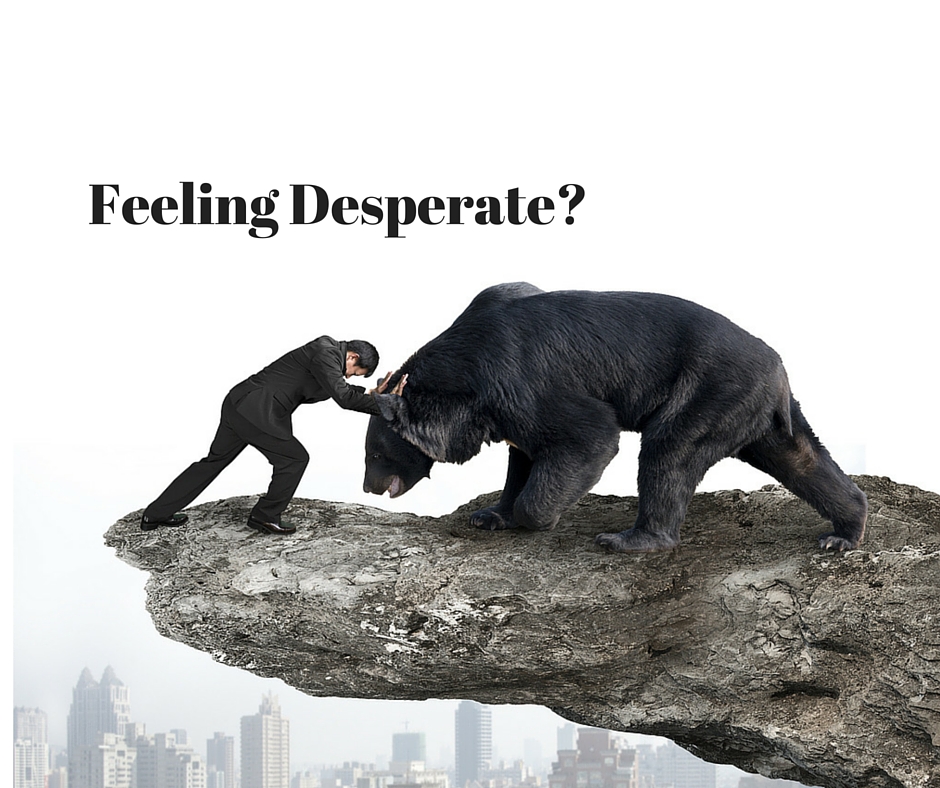 You feel hopeless, frantic, doomed.  You feel like you’re on the brink of failure, of giving up hope.  Your situation seems impossible.  Anyone who has ever experienced desperation knows that it feels horrible.  I wouldn’t wish it on anyone…and yet.  I do.

We only get desperate about things that really matter to us.  So if we turn down the volume on our desperation we may forget what’s important in our lives.

Consider the common fable of the boiling frog.  As the saying goes, if you put a frog in boiling water it will immediately jump out.  But if you gradually heat up the water, the frog won’t notice and will boil to death.

If you’re aware of an increasing feeling of desperation then you may be able to take some action.  Take a leap.  But if you ignore your feelings it could disastrous.  You could stay put, never trying to get out of the hot water.

The fear of leaping

It seems like we get into desperate situations because the choices that we have to make to get out of them seem equally scary or unpleasant.  I’m desperate to get a better job but the thought of working harder, facing interviews, or going back to school seems just as bad.  I’m desperate to be in a relationship but the thought of asking someone out, being vulnerable, or possibly facing rejection seems worse.

The fear of the unknown begins to outweigh the pain of the known.  My situation is lousy but, hey, maybe it’s better than the unknown alternative.  I hate my job, but if I leave it, maybe my next job will be worse.

Unfortunately, denial only works for so long and then you’re faced with the problem and the feeling of desperation again.

When leaping is better than boiling

If you allow yourself to really feel your desperation about something, it’s painful, but it can make the alternatives seem much less terrible.

When I weighed career failure against uncomfortable business calls, those calls became much easier.  Still uncomfortable.  But important enough to get me through it.

When I weighed being alone for the rest of my life against the anxiety of dating, I pushed myself to step out of my comfort zone and flirt.

This is the thinking that helps people overcome addiction.  It isn’t until a person truly faces their despair, acknowledges the wreckage that the addiction is causing in their life, that they really have the power to face what they have to do and get the help they need.

There’s no guarantee that the next thing you jump to isn’t going to be worse than your current situation, but going unconscious to your current situation, ignoring your desperation, is not the answer.  If your next situation is worse, then you can always leap again.  Yes, it would be lovely to have the guarantee that every choice you make would bring immediate positive results.  But sometimes you have to make a series of choices to get to where you want to go.  You have to leap from rock to rock to get to the other side of the river.

Thoreau said, “The mass of men lead lives of quiet desperation.”  Well, I’m suggesting that you shouldn’t be so quiet about it.  Turn up the volume so that you hear clearly what it is that’s important to you.  There’s no reason to despair.  Where there is life there is hope.