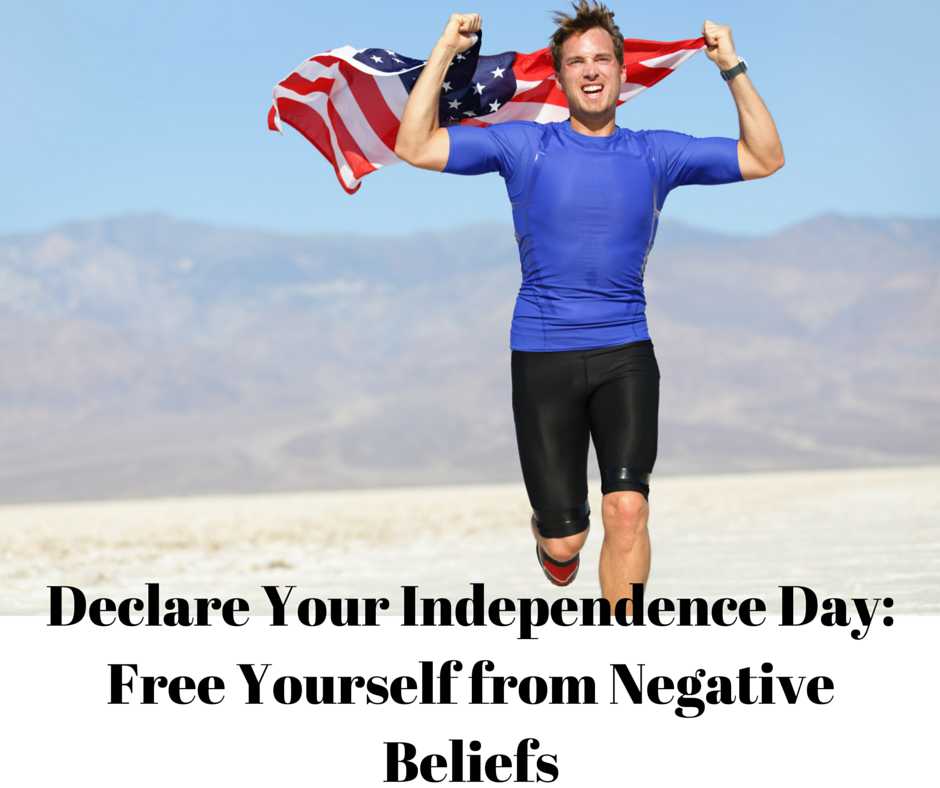 In the wake of celebrating our country’s Independence Day, it’s a good time to consider what kind of dictatorship you’re living under.  Far more controlling than the President or the police, your own beliefs dominate you and dictate your behavior.

Just like America, we do need some kind of government to keep us functioning properly.  Our beliefs about how we’re supposed to behave are our personal governments.  If we didn’t have our beliefs keeping us in line, we might just eat ice cream for all of our meals.  We might skip work to go the beach everyday.  I, personally, would wear pajamas all day long.

No, we don’t want to completely overthrow our belief system.  But we do want to pay attention and make sure that the orders that we’re following, the beliefs that we’ve come to believe since childhood, that tell us how to behave, and how to think, and how to engage in relationships, are really in our best interest and worth listening to or are ready for revision.

If we took a deeper look at our personal constitutions, we would all find some beliefs and rules that are pretty messed up and problematic.  This is foundation of Cognitive Behavioral Therapy.  In Cognitive Behavioral Therapy the concept is that our thoughts affect our behavior and therefore we need to look under our problematic behaviors and discover the troublesome thoughts that are triggering those behaviors.

AN EXAMPLE OF A PERSONAL WAR

I have a friend who is very quiet and shy.  He’s not happy about his quietness.  He feels like it affects his relationships negatively.  People ignore him or don’t notice him.  His quietness affects his relationship with himself too.  He criticizes himself for being shy.  But if you look under the problematic behavior of his shyness, you will find the negative beliefs that are causing the problem.  There may be several negative beliefs or just one.  “I’m unimportant, I’m stupid…I have nothing valuable to say.”  “I will be ridiculed. I will be rejected.”  “It’s not okay to be quiet.  Quiet is bad.”

START A REVOLUTION IN DEFENSE OF YOURSELF

If my friend threw a revolt against these negative beliefs, he might say, “It’s cool to be quiet!  I’ll talk when I want to!  I refuse to spend my life trying to be someone that I think other people want me to be.  I choose to respect the person that I am and change if I choose to change.”

Value yourself.  “I’m not stupid and I also don’t need to be a Nobel Prize winner in order for my thoughts to be worthy.  My thoughts do matter.  I choose to be in relationships with people who value me.”

REBEL AGAINST THE FEAR OF RIDICULE

The fear of ridicule stops many people from expressing themselves.  But throughout history geniuses and innovators have been ridiculed and proved their critics wrong.  Where would the world be if everyone listened to the critics?  Still thinking the world was flat!

Abolish the fear of ridicule by declaring, “I reject people who ridicule.  It’s okay to disagree, but ridicule is for bullies.  I’m not going to stifle my creativity and my personality for fear of bullies.”

One of the negative beliefs that support the fear of ridicule is the belief that you’re fragile and that you can’t handle ridicule.  You fear that it will hurt you emotionally, that you won’t be able to stop the injury to your self-esteem, that you will become depressed, anxious, or insecure.

You must defy the belief in your fragility!  You can take it!  You’re able to recover from an insult.  You’re not defenseless against attack.  You have reinforcements.

OTHER WARS TO BE FOUGHT

As with any battle, there is struggle.  First you have to discover what you’re fighting against.  What are the negative thoughts that have to be challenged?  Then you have to come up with a battle plan.  How am I going to fight these negative beliefs that I’ve carried around with me for so long?  And then you have to wage battle against those negative thoughts.  Some skirmishes you’ll win.  Some you’ll lose.  The enemy may continue to reappear even after many successful battles have been won.  But ideally, over time, those negative beliefs will come at you less frequently and will be easier to overcome.

Our country’s independence day is a great time to consider your own revolution.  Free yourself from the tyranny of negative beliefs, so that you can be the greatest nation of YOU.