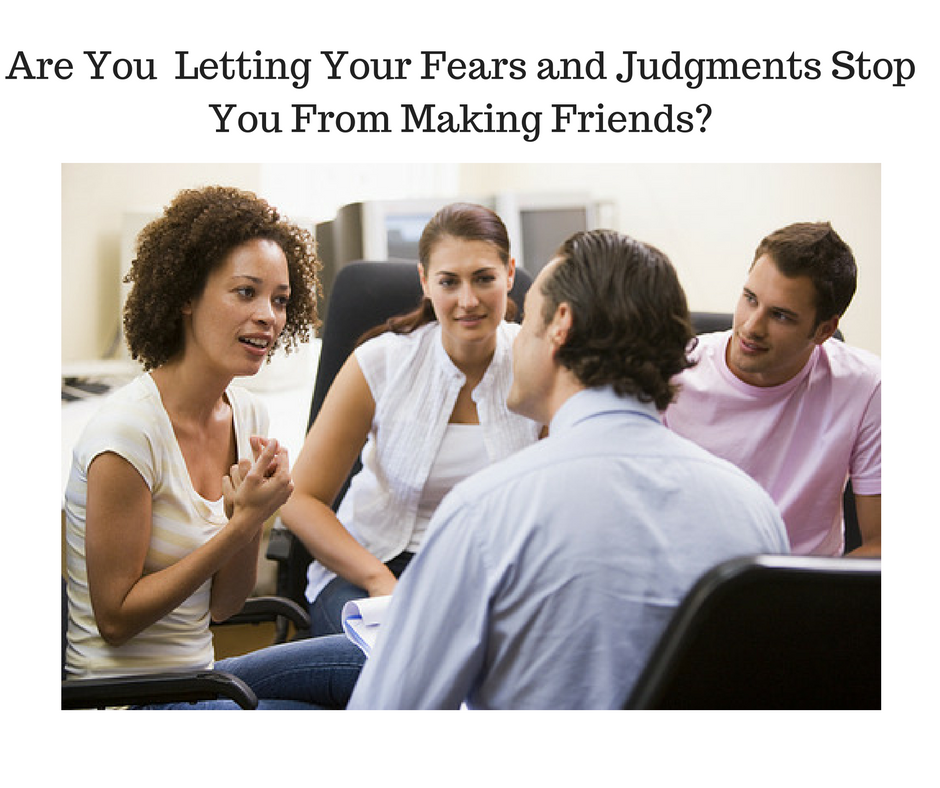 Across the circle we took surreptitious glances at each other.  This was a diverse group of men and women; Caucasian, Asian, Hispanic, gay, straight, shy, extroverted.  Yet, I felt especially different from the man sitting directly across from me.

He sat, legs apart, slumped into his seat, as if he were sitting in front of a campfire.  He was a strong, silent, Christian man with a slow-talking Southern drawl.  I’m a female, Jewish, urbanite with a sometimes librarian-esque use of the English language.

We looked at each other as if we were specimens at a museum.

In everyday life, we might never have encountered each.  But here, that was the goal of the therapy-focused support group.  We were expected to express our thoughts and feelings, sharing who we are with each other in order to better understand ourselves and others.

I was well aware that I had prejudices about this man – prejudices that stemmed from movies, books and television.  Or maybe some of these prejudices were based on real-life encounters. But how often are we prejudiced by encounters that are brief, incomplete and unfairly generalized?  I’m not proud of my prejudices, but they exist.  To ignore or deny our own prejudices is to allow them to remain unchallenged.

My prejudice raised questions such as: is he intelligent?  Will he think I’m pretentious if I use obscure vocabulary?  Is he prejudiced against Jewish people?  Does he hate strong or outspoken women?  Basically…will he hate me?

I was a little worried about being myself with him for fear that he would judge me.

This is a common feeling for many people in groups and in life.  They avoid judgment by suppressing their individuality.  But because of our commitment to the goals of the group, we kept moving forward, sharing more and more of who we were.

I began to like him.  He surprised me in many ways.  His language was simple, but he was smart, thoughtful and progressive in his community.  While his voice, face and body remained stoic and controlled, he revealed deep feelings of concern and love for the people in his life, and a desire to be helpful and useful.  When I spoke, he listened with interest.

But the breakthrough came when he addressed me directly and actually spoke about the prejudice between us, from his perspective.

He expressed appreciation for me, interest in how different I was from him, and admiration for my education and intelligence.  He also expressed his fear that I would see him as a stupid, country hick.

I was surprised, flattered, and impressed with his openness.  It took courage for him to admit his insecurity with me.  It hadn’t occurred to me that he could also be afraid of my judgment of him.  I responded to his vulnerability and honesty by sharing my own feelings of insecurity and fear of judgment with him.

It was a beautiful, honest experience of mutual respect and connection.  We were two people with different backgrounds, life circumstances, and experiences, but at the core, we were just two equal human beings trying to be our true selves and fearing the judgment of others.

Sharing your honest thoughts and feelings about how you feel about someone is not something that happens that often in everyday life.  The main reason we don’t share these things in our lives is because we fear that the truth could endanger those relationships.  That’s one of the unique benefits of group therapy: you take greater risks in being honest and truly yourself, because no matter what happens to the relationships in group, there won’t be any negative repercussions in your personal life.  However, taking these risks in group can provide you with important insights and experiences that can give you the confidence to make changes or take emotional risks that can have very positive effects on your life.

This is one of my favorite things about group therapy; when people discover the humanity of a person beyond their prejudices.  It’s our prejudices that block us from enjoying the people around us, and it’s our prejudices and fear of scorn that keep us from feeling confident enough to freely share ourselves with others.  Our prejudices keep us isolated.  Group can help you connect.