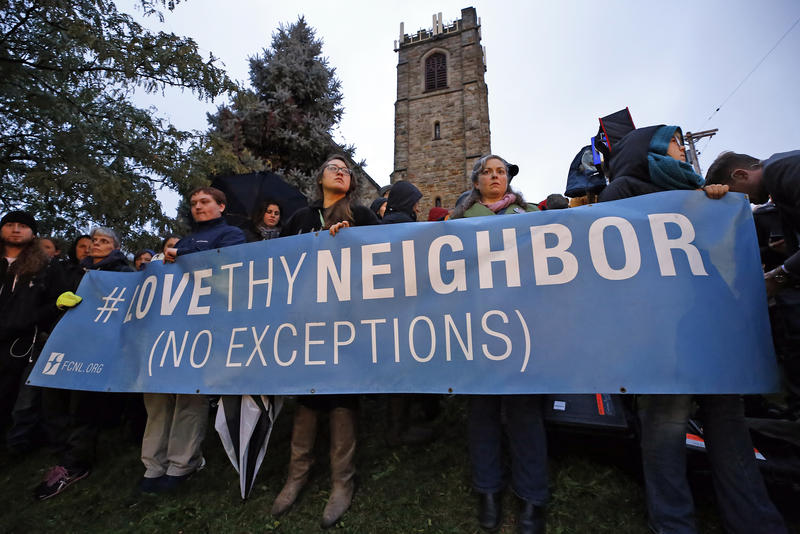 A group holds a sign at the intersection of Murray Ave. and Forbes Ave. in the Squirrel Hill section of Pittsburgh, during a memorial vigil for the victims of the shooting at the Tree of Life Synagogue where a shooter opened fire, killing multiple people and wounding others, including several police officers, Saturday, Oct. 27, 2018. (AP Photo/Gene J. Puskar)

I told my innocent Jewish daughter about the Holocaust when she was ten.  I had no choice.  After visiting numerous cathedrals in Italy, we had thought it might be nice to see a beautiful old Jewish temple in Rome.  As much as we enjoyed the cathedrals, we felt a little left out.  We can’t claim those beautiful places as part of our heritage.  But at a temple we can at least say, this is somewhat related to us, through our shared ethnicity.  During the tour they told us that hundreds of members had been taken away to be killed because they were Jews.  My daughter gasped and looked to us for an explanation.  What explanation can you give?  But we had to tell her the truth of what happened.

I remember a night when my daughter was two.  She’d woken up in the middle of the night and had to go potty.  In the dim light of that tiny bathroom, I sat across from her to make sure she didn’t fall in.  She was so tiny and her face was so sleepy that my heart surged with love for her.  It felt so safe and close together.  I suddenly thought of all the sadness in the world that she had yet to discover.  She didn’t know about death yet.  She didn’t know that someday I wouldn’t be with her in the middle of the night when she needed me.  And she didn’t know about cruelty and hatred.

She learned about death when she was five.  Death is natural.  I didn’t want her to be afraid of death by keeping it a secret.  I did my best to be gentle but honest.  We spoke openly about the cat dying which eventually led to her talking about me dying and then herself.  She expressed her sadness that we would die.  I wanted her to know that we can be sad, but we don’t have to be afraid.

But cruelty and hatred are much more difficult to discuss.  How can we not be afraid?  How can we not be horrified and disgusted?  Although I wanted to shield her from man’s capacity for violence for as long as possible, with all the hatred in the news these days, I knew that she was going to find out soon enough.

So now I have to tell her that a man decided that he needed to kill Jews.  He went into a temple and slaughtered 11 innocent people.  It could have been her grandma or her uncle.  It was easier to talk about the Holocaust as something in the past.  But how do you talk about violence that is happening now?  Why do Jews need to put armed guards around their places of worship?  I don’t want this to be the world our children inherit.  But it is.

We need to see hatred in our communities and stand up against it.  We need to feel its sting whether it’s your group or any other group.  Hatred and violence damages us all.  We don’t all have to be crusaders, but we can be heroes in our own lives.  We need to own our own hatred and diffuse it.  You can be an example of love and acceptance for all people.  You can respectfully (and safely) challenge the hateful comments made by the people that surround you.

Newton’s third law said that for every action, there is an equal and opposite reaction.  Let that reaction be love.   That is the only thing that I can tell my daughter when faced with hate.  Choose love.