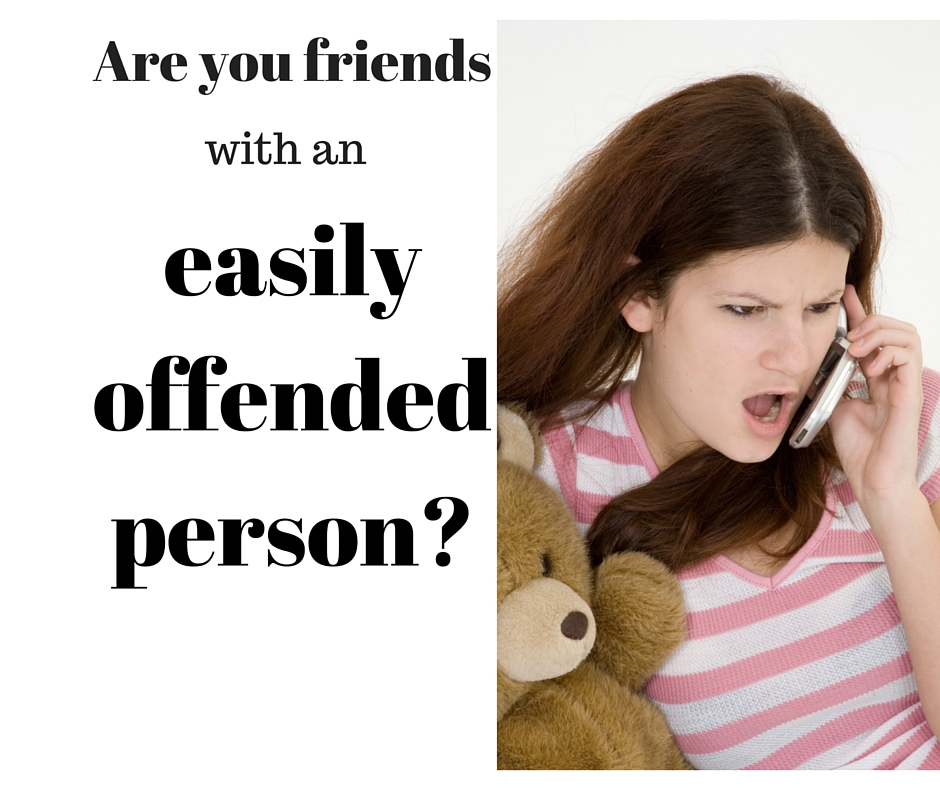 The other day I had a conversation with someone that I’d just met.  The point of the conversation was to get to know each other.  We both wanted to build a friendly relationship.

Could we be friends?

She was welcoming.  She smiled and laughed.  She was willing to share some personal information about herself.  All good signs.  We exchanged a few stories about ourselves.    But a few of the stories began to make me nervous.

The stories were about people that she didn’t like anymore, people who’d offended her that she’d stopped being friends with.  Hmm.  The distinguishing factor was that what these friends had done to offend her appeared to be very vague and easily misconstrued.

Of course it’s natural for disagreements to occur, for differences to arise and for relationships to end.  Not all relationships are meant to last forever.  But the fact that she mentioned three of these stories in our first conversation seemed to be sending me a message, “I’m easily offended, so be on your guard not to piss me off or I will end our friendship.”

Why would someone want you to know that they’re easily offended?

Because they want to be friends with you.  They don’t want the relationship to end because you made them angry.  But they don’t realize that they have control over it.  They think all the responsibility lies in your behavior.  If they can warn you to behave yourself, then hopefully you will, and a break up can be avoided.

Walking on eggshells affects the quality of your relationship.

People who are easily offended are like land mines that go off when you stumble across them accidentally.  There’s no room for error.  And when that land mine goes off, it can destroy everything.

No one likes being on the defensive; having to watch what they say for fear that something will set their friend off.  Defensiveness inhibits the joy of a relationship.  There can be no true intimacy when there is a lingering fear of another person’s sensitivity.

Being easily offended is not necessarily a reason to not be friends.

No one is perfect.  If you stay friends with someone long enough, you’re going to do something wrong.  We all make mistakes sometimes.  If we want an easily offended person to forgive us for our mistakes, then perhaps we can forgive them for their sensitivity.  If we judge everyone too harshly, we could end up with no friends at all.  If you have good boundaries and self-care, you can practically be friends with anyone.

It’s helpful to understand your friend, though, so that you’re prepared and can know how to take care of yourself.

Why easily offended people are the way they are.

Some people can’t tell the difference between intentional and unintentional behavior.  They tend to interpret behavior that they don’t understand, negatively.

If a friend doesn’t smile or look at them, they may jump to the conclusion that the friend is mad at them.  They take things personally and don’t consider that there may be other factors involved that have nothing to do with them.  Maybe the unsmiling friend is just in a bad mood or lost in thought?

It may be that a history of being mistreated has made highly sensitive, easily offended people more guarded; causing them to spot mistreatment, sometimes when it doesn’t exist.

Or they’re reacting to a time when they weren’t offended enough!  They had been oblivious to their mistreatment and they vowed never to let that happen to them again.

Empathy and understanding go a long way in helping you cope with an easily offended friend.  But you may also have to do what they can’t:

Offense.  Defense.  Those are fighting words.  What you both want is to be friends, but you don’t want to be mistreated by your friends.  Hopefully with awareness, communication, and forgiveness you can have relationships where everyone can put their guard down.

If your friendships are more frustrating than enjoyable and you’d like to learn how to maintain satisfying, respectful relationships, you could benefit from the support of a trained psychotherapist.