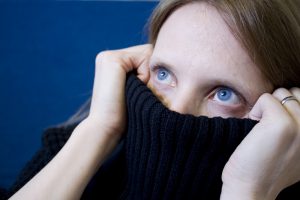 Occasional anxiety is a natural part of being alive.  People can feel anxious before taking a test, going on a first date or driving on Ventura Blvd. at rush hour.  In contrast, anxiety disorders are more severe and longer-lasting than these intermittent anxieties. For a person with an anxiety disorder, the anxiety does not go away and can get worse over time. The feelings can interfere with daily activities such as job performance, school work, and relationships.

Surpassing even depression, anxiety is the most common form of mental illness in the United States. It’s estimated that approximately 10 percent of teenagers and 40 percent of adults suffer from an anxiety disorder of some kind.  Those who suffer from anxiety are prone to suffering from depression simultaneously.

Symptoms of an Anxiety disorder

Anxiety tends to be less severe and of a longer duration than panic. Anxiety is often coupled with excessive worry that intensifies over a period of time.  The symptoms of anxiety may be:

Symptoms of a panic disorder

To be officially diagnosed with a panic disorder you must have had at least one attack which is followed by a month of increased anxiety or avoidant behavior due to the fear of having another panic attack.  In addition, while having a panic attack, you must have experienced at least four of the following symptoms :

Panic attacks may seem like they last forever, but their duration actually lasts for about ten minutes. It is helpful to remind yourself that it will pass.  You may feel shaky afterwards, but the intense anxiety will go away.

Social anxiety is the fear of being judged and evaluated negatively by other people. Social situations almost always provoke fear and anxiety.  There is a fear that you will act in a way that will cause you to be humiliated, embarrassed and rejected.  This fear leads to an avoidance of social situations for at least six months.  Social anxiety can really limit your life. When you experience social anxiety you can feel incredibly discouraged. You miss out on being able to peacefully enjoy the company of friends.

Everyone tries finds methods to cope with their anxiety, but some of those coping strategies can make matters worse.  Angry outbursts may momentarily relieve stress but they can also damage your relationships.  Using alcohol, drugs, or food to numb yourself out, or isolating yourself by avoiding activities that trigger anxiety.

Medication is useful for alleviating the symptoms of generalized anxiety disorder and is often prescribed in conjunction with other therapies. Some types of anxiety drugs can be habit-forming and are usually prescribed on a short-term or as-needed basis.

Different anxiety disorders have different medication regimens. Some are preventive and some are designed to cure the problem.

Untreated anxiety can increase your risk of more severe, even life-threatening conditions. These conditions include:

Anxiety disorder and depression often occur together. They have similar symptoms and can be difficult to tell apart. Both can cause agitation, insomnia, the inability to concentrate, and feelings of anxiety.

According to the National Alliance on Mental Illness, more than 90 percent of people who die by suicide have been diagnosed with mental illness. This can include anxiety. According to the Substance Abuse and Mental Health Services Administration, about 4 percent of adults per year in the United States have serious thoughts about suicide. These numbers are higher in people who also have depression.

If you have obsessive-compulsive disorder (OCD) or social phobia, you are also at an increased risk for suicide. If you have one of these anxiety disorders along with depression, your risk is even greater.

Seek medical help immediately if you’re considering acting on suicidal thoughts. If you aren’t near a hospital, call the National Suicide Prevention Lifeline at 800-273-8255. They have trained staff available to speak with you 24 hours a day, seven days a week.

Often, people with anxiety use alcohol and other substances to relieve their symptoms. There is no evidence that alcohol actually relieves anxiety, but the belief that it does can bring some relief. Some people report temporary relief from anxiety while under the influence of alcohol or other drugs. However, long-term alcohol use can cause biological changes that may actually produce anxiety.

People with generalized anxiety disorder (GAD), panic disorder, and social phobia are especially at risk for alcohol and drug abuse. Smoking and substance abuse are also common in cases of post-traumatic stress disorder (PTSD). Adolescents with PTSD also have an increased risk of eating disorders.

Anxiety disorder increases your risk of developing certain illnesses. Chronic stress, which may be associated with anxiety, can compromise your immune system. This makes you more susceptible to infections, such as colds, the flu, and other viral and bacterial diseases.

Trouble on the Job

The symptoms of anxiety can cause difficulty working with colleagues and clients, trouble concentrating, preoccupation over the fear instead of focusing on work, and turning down assignments because of fear of failure, flying, going in to the elevator, or public speaking.

Anxiety can cause people to withdraw from the activities and people that they used to enjoy.  Anxiety can make a person cling too to tightly to the people in their lives or hide their true feelings for fear of upsetting others.  If anxiety leads to substance abuse or work problems that will cause problems in relationships.

There are many healthy habits that can help when you’re suffering from anxiety:

Click this link for more information on relaxation techniques.

Anxiety is very treatable  Yet, two-thirds of adults with anxiety never get treatment. And only 1 out of 5 teenagers with anxiety are receiving the treatment they need.  If you live in the San Fernando Valley of Los Angeles there are many resources available to you to receive care…and you don’t even have to drive over the hill.